Good Luck – the road to success! 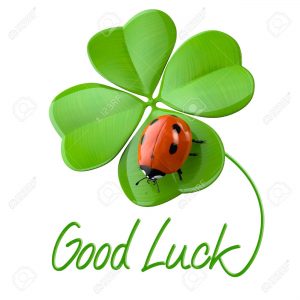 If you have read last week’s blog post, we can note that Manchester United even won the 6th match in a row – against a real top team! Congrats Manchester United, is it luck that keeps them there or is it the result of hard work? Probably a bit of both, however as I wrote in the last post the passion in leadership is a major part in the hard work. Passion is needed, so is willingness to work hard.

Let me quote a few people:

Benjamin Franklin (American politician, 1706-1790): “Diligence is the mother of good luck.”
Barbara Sher (American author, *1935): “The amount of good luck coming your way depends on your willingness to act.”
Lucius Annaeus Seneca (Roman philosopher and statesman, 4BC-65AC): “Luck is a matter of preparation meeting opportunity.”
Ian Duncan Smith (Brittish politician, *1954): “Luck is great, but most of life is hard work.”
Denzel Washington (American Actor, **1954): “I say luck is when an opportunity comes along and you’re prepared for it.”

You see the pattern? None of those successful people believe that success is just based on fortune, all of them say that success needs hard work, willingness to act, preparation, etc. The question is if you are willing and ready to do this?
In case you have any doubts I could not better describe it as one of the most famous Austrians of today, the former Californian Governor, actor and most successful bodybuilders ever, Arnold Schwarzenegger (*1947) has done in one of the most seen speeches on YouTube last year: The speech that broke the internet about hard work and focus. Very inspirational, spend 12 minutes and listen.

I really don’t have anything to add, can just quote George Lucas (American movie director, *1944) who said “Good luck has its storms” – I really believe he is right, but let us listen to two other great artists of our time:
Bruce Springsteen (American singer, songwriter and bandleader, *1949): “When it comes to luck, you make your own.”
Phil Collins (English drummer, singer, songwriter, Genesis and solo, *1951): “All I set out to do was to earn a living playing drums, you know? And as luck would have it, I’ve surpassed that”.

So we start the week with understanding George Lucas’ comment, even in the storms we do as Arnold Schwarzenegger and Bruce Springsteen have told us and always hope we can at some point sum-up like Phil Collins. Deal? Have a successful 2019!