DO THE RIGHT THINGS RIGHT!

This is the first blog-post in a series that shall give you some inspiration and some hopefully valuable knowledge in a at least bi-weekly rhythm in future. I have for some time considered now if I shall have a blog at all, one in English, a mixed in English, Swedish and German, whether there shall be guest bloggers or not, ….

Here is the conclusion: I am not behaving Swedish now 😉 –  but as a matter of fact, I am the CEO and I shall decide 🙂

But now to one of my favourite teachers who I only once listened to in Vienna in the 80ies, but who has inspired me often:

Peter Drucker, 1909 – 2005, as myself from Austria. His parent’s home was just outside Vienna in the vine-district that is now part of Vienna and where also famous composer Ludwig van Beethoven used to live. And there his interest in business was born since his parents obviously hosted famous economists among them Joseph Schumpeter and Friedrich Hayek. Peter later moved to Germany and England to work and study and finally moved with his German wife to the United State to become famous himself, lecturing at New York University and Claremont Graduate University in California. He is definitely one of the pioneers in contributing to the foundation of modern business corporation. 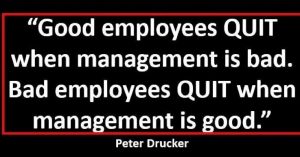 1. Thought is about the importance of quality in management:
One of the famous quotes of him is to the left. I am sure you will easily confirm it, but really scaring is that you most likely have own experiences also from the first half. Thinking about that majority of managers and leaders today should have learned that already in school, it is very astonishing that it still happens….

2. Thought about the focus on the right things:
I can stay with Drucker who said also that “the best way to predict the future is to create it”. There are several more quotes of him that fit into this category, I don’t want to bore you too much about it, I prefer to refer to the quote to the left, by Steve Jobbs, the founder of Apple and father of the Mac, Iphone and Ipad. I think we all agree that attention needs to go to the right things..

So therefore I want to conclude those 2 thoughts to the motto I have chosen for life and I also will apply in Tovoy when working with Change Management for our clients. But before I do this one more quote: “Management is doing things right, Leadership is doing right things”. Who do I quote now? Hm, I have been sure it is Warren Bennis, MIT professor who has stated this in the middle of the 80ies, since I am familiar with it since at least 30 years – I have always liked it! Then others claimed even this quote is one of Peter Drucker’s. As far as I understand it origins from a book by Warren Bennis and Burt Nanus from 1985 (Leaders: The Strategies for Taking Charge), where the same meaning is said but in a longer sentence. Then later Peter Drucker and Warren Bennis worked obviously together and are therefore quoted in Seven Habits of Highly Effective People (1989) by Stephen R. Covey in exactly this way. I don’t really care about it, what I care about is to conclude the 2 thoughts to that both Excellent Management and Excellent Leadership should co-exist.